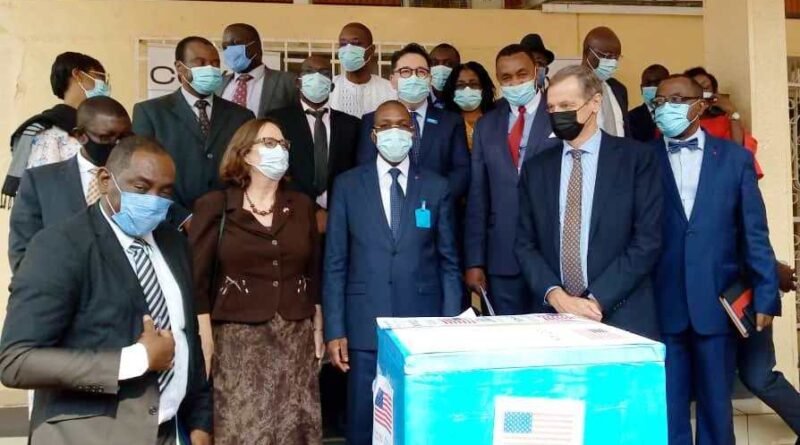 The minister of Public Health on behalf of the government of Cameroon has received 303 050 doses of the U.S Johnson and Johnson vaccine donated to the country on July 22, 2021.This was during a press conference jointly granted by the Coordinator of the United Nations Organization in Cameroon, the Deputy Chief of Mission of the United States Embassy in Cameroon, the ambassador, the chief of the European Union Delegation in Cameroon,and Cameroon’s minister of Public Health. This was at the Ministerial Department of the Ministry of Public Health on Monday July, 26, 2021.

Talking at the event, the  U.S Charge dAfffaires in Cameroon, Mary Daschbach reminded that the COVID-19 pandemic is a global challenge which needs joint efforts to be eradicated. This according to her, is one of the major reasons why the U.S president, Joe Biden has donated the Johnson and Johnson vaccine to safe the lives of Cameroonians, one his major partners.

“COVID-19 does not know global limits. We are all into this challenge. Our president Joe Biden has offered this Vaccine to Cameroon so that the distribution of the vaccine should be equitable.  I encourage all Cameroonians to take this vaccine. It is the same vaccine that is used in the United States, and not expired vaccines,” explained Mary Daschbach , U.S chargé d’Affaires in Cameroon,

She went on to say that the Johnson and Johnson vaccine is 100% efficiently, as it spares people from being admitted in hospitals and death. She reiterated that victims of COVID-19 in the U.S today are barely those who have refused to receive the vaccine. The major difference between the Johnson and Johnson vaccine and other vaccines is that the former is administered in a single dose.

On his part, Minister Manaouda Malachie on behalf of the Cameroonian State expressed gratitude to the government of the United States for its efforts towards eliminating the global pandemic, which Cameroon is still suffering from it’s effects.  He reiterated that this gesture comes to reaffirm corporation ties between both countries.

“The government of the Republic, through my modest voice, wishes to extend to the COVAX facility through which this donation passed, and especially to the United States of America its deep gratitude for this gesture of humanism, friendship and fraternity to the people.  Cameroonian.

This is a sign of active solidarity, of a manifested and undeniable confidence in Cameroon, the testimony of a fruitful cooperation between Cameroon and the United States of America, proudly carried by the  two Heads of State.

It also reflects the excellent relations we have with this friendly country and brother in love with justice and concerned with equity in access to health care and immunization in particular.” the Minister emphasized.

It is worth recalling here that this support comes in addition to other American aids that Cameroon has benefited from since the start of the pandemic, through the American Centers for Disease Control and Prevention (CDC) and government Agencies such as USAID.

The conference  was an occasion for the Minister to reassure Cameroonians of the validity and  efficacy of the vaccine, as he encouraged them to massively go in for it. “The Johnson and Johnson vaccine that we are receiving today is approved by the World Health Organization (WHO).  This is also why they came to us through the COVAX facility;  proof of the very great confidence of the USA in the UN institutions.

It is about the most used vaccine currently within the framework of the vaccine response against the COVID-19 pandemic. It presents many  advantages for Cameroon in particular. It’s administration is in a single dose and its recognized efficacy on the different variants in particular South African, Britain and Delta for those who have already been identified,” minister Manaouda Malachie.

The Ambassador, chief of the European Union on his part once more encouraged individuals to receive the vaccine, thereby saving themselves and the society as a whole. He urged the minister to carry on more sensitization campaigns to better convince the population to see the need of receiving  the vaccine, which remains the major challenge today.  To him, the lone solution to the health crisis is the vaccine, which is very viable.

According to national statistics, Cameroon has registered 82064 confirmed cases, 1334 deaths and  80, 588 recoveries, or a recovery percentage of 98.2.