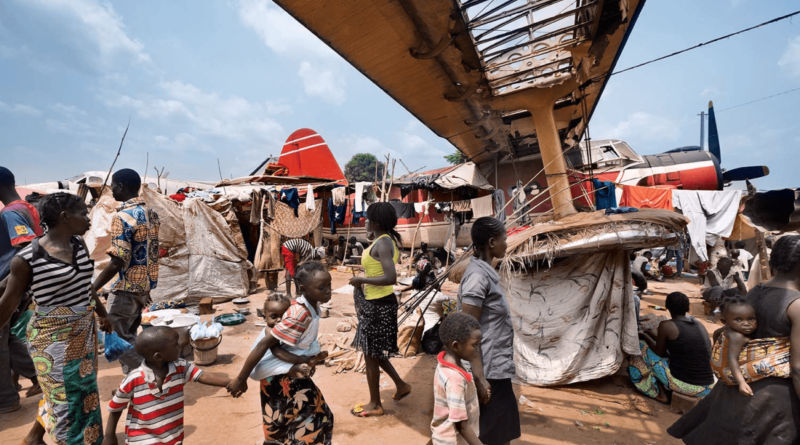 There has been a persistent increase in the prices of basic food stuffs in Central African Republic, an unpleasant situation that has left households complaining to the government to do something about the situation.

The most remarkable item among these food stuffs is vegetable oil. It is very hard in households and restaurants to cook with a sufficient quantity of oil because prices have suddenly increased, and it varies from one market to another.

At the Central market of Bangui, a litre of vegetable oil now costs FCFA1800, unlike in the previous times that were sold at FCFA1000. A 20 litre container is now sold at FCFA37500, instead of FCFA20500, as it used to be some months ago.

This increase in price has greatly affected the nutritional budget of some families. “The current situation is so regrettable because just yesterday, I bought a litre of oil at a price of FCFA1500, but when I came today, they said FCFA1800.

You see how it is increasing. Where will we go to?  It is very difficult and expensive for my family and I to afford. How much am I earning to be buying oil at this price!,” Lamented a buyer.

Just like this buyers, sellers on their part are complaining. They have said that this inflation has led to constant conflicts between buyers and sellers, who no longer understand themselves. “When buyers come, we spend time arguing to the extent that we can even fight. We have lost many customers.

We are also asking ourselves what may have caused this situation. We are buying from wholesalers at very high prices. The prices are increasing everyday, but we don’t know the reasons,” a seller explained.

A reduction in the price of oil could relieve the sufferings of the people. The victims are calling on the government, particularly the ministry of trade to do something about the situation. “We call on the government to send people to the field to control the prices of food items, if not, I don’t think we can continue to cope,” a housewife pleaded.

Meantime, nobody knows the fundamental cause of this acute increase in price. The ministry of trade and wholesalers preferred not to make any comment on this matter.

However, according to the latest « Price monitoring Bulletin » produced by Central African Institute for Statistics, Economic and Social Studies (ICASEES) with support from the World Bank, published in January 2021, the prices of basic imported food products, including milk powder, salt, sugar and onions, had spiked from 15% to 24% in markets surveyed across Bangui, Bimbo and Bégoua during the first week of January.

These prices had significantly increased following the surge of insecurity and the blockage of the Douala-Bangui trade corridor. Hundreds of trucks with critical supplies of food products, humanitarian supplies and water treatment chemicals remain stranded at the border crossing.

The prices of local food products such as palm oil, cassava and beef also increased significantly between 16 and 44% — as a result of inter-regional supply disruptions following the intensification and spread of armed conflict in the region

This new wave of price hikes and instability has escalated more sharply and rapidly compared to the volatility and increase in prices experienced during the onset of the COVID-19 pandemic in July 2020.

“These are alarming developments. It is affecting the poorest, which have fewer or no food stocks and savings and are already feeling the brunt of the adverse impact,”said Han Fraeters, World Bank Country Manager for the Central African Republic.

“The stakes are very high. The current situation must be addressed urgently to avoid reversing years of development progress and threatening to push more people into extreme poverty,” he went further.

This is the third shock experienced by the Central African Republic over the last six months following the COVID-19 economic downturn and the October floods that hit the country where more than 70 percent of the population lives below the poverty line.