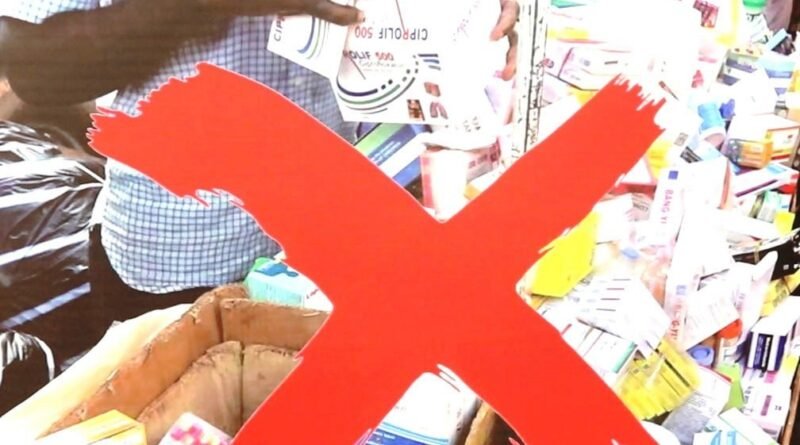 As Cameroon joins the rest of Africa this October 12 to commemorate the African Day dedicated to the fight against the sales of illicit drugs, the Production and circulation of prohibited drugs seem to be taking a different dimension in the country, despite government’s efforts to put an end to it. As days go by, more persons are intercepted by forces of law and order, transporting either substandard or fake drugs through unorthodox means.

The number of drugs roadside vendors keeps rising, despite several crackdowns carried out in different cities by government and health officials. Since his coming to power in 2019, the minister of public health, Manaouda Malachie keeps intensifying messages on the ban against the sales of illegal drugs nationwide.

The year 2021 has been marked by a series of such events, where forces of law and order intercept dealers of non pharmaceutical products. Going down memory lane, on Thursday, May 27, 2021,  Cameroonian Customs officers seized a large shipment of drugs with an estimated financial value of FCFA15 million in the locality of Gari Gombo and Bertoua in the East region of the Country.  This cargo composed of hydroxychloroquine used in the fight against the Covid-19 pandemic and other dangerous drugs.

These drugs were subsequently destroyed under the watchful eye of the Governor of the East Region, Grégoire Mvongo. It was an occasion for the governor, just like his peers in other regions to send out a strong warning to dealers of such products.

“I would like the traffickers to receive this message clearly: we will not allow them to do this bad job in this region. We will always be on the side of the populations so that their health improves,” said the governor.

On Saturday, May 15, 2021, the Gendarmerie Brigade of the eponymous town of Mamfe seized nearly 10,000 Bottles of “Guinness” in Mamfe coming from Nigeria. The seized items included 9,200 bottles of Guinness contained in 400 boxes, 300 boxes of 33cl and 100 60cl cartons, smuggled into the country from Nigeria.

Again, in three different operations carried out  in the Littoral, West and Centre Regions in July 2021, huge quantities of contraband drugs illegally imported into the country were seized and destroyed by government and security officials.

In the Littotal Region, the Divisional Officer of the Douala IV subdivision launched a war against dealers of fake and expired medications. This was done during an operation launched by the Regional Delegate of the National Security in collaboration with the Divisional Officer of the Douala IV subdivision to put an end to the sales of illegal drugs in the region. It was an occasion for the D.O to remind the population to be vigilant, to avoid being victims of fake and expired drugs, which he says is dangerous for their health.

“We are today destroying the drugs that have been seized in relation with the committee of fighting against bad drugs. So we are using this opportunity to tell the people that they should be aware of the dangers of bad drugs that are being sold along the roads. You need to go to the hospital when you are sick for better drugs. Those drugs are part of our health while consuming it, they become like a poison injected in our body,” said Daouda Issa, D.O of the Douala IV subdivision.

These cases are just few among the numerous registered in Cameroon on a daily basis. To ensure the complete elimination of such practices across the national triangle, the government has put in place institutions such as the National Order of Pharmacists to monitor and spot out any of such drugs in circulation.

“A team which was put in place a long time ago to fight against illicit drugs and to be sure that these drugs are seized and destroyed is no longer functioning,” Naseri Paul Bea, the governor of the Centre region lamented.

Dr. Lapnet Moustaph, secretary general of the council of pharmacists in Cameroon added that once a strategy is put in place for the fight against Counterfeit drugs, it needs to be adjusted as time goes on, in order to succeed in the battle. To him, besides the availability of drugs, it should be accessible. That is why the government has embarked in the universal health coverage.

These intellectuals arrived at conclusions that will soon be implemented by pundits in various regions to curb the spread of th illegal activity.

In Cameroon, the economic damage of falsified drugs stand at about Fcfa60 million, with 45 percent of drugs on the markets being imported. It is estimated that 100 persons die every year in Africa as a result of the use of counterfeited medications.

According to the European Union Ambassador to Cameroon, Philippe Van Dame, worldwide, $200 billion US Dollars of fake medicines circulate on an annual basis, with more than 40 percent of them in Africa.

The World Health Organization on its parts estimates that as many as one in ten medical products circulating in developing countries are substandard or falsified. The proportion of fake pharmaceuticals in developing regions such as Africa can be as high as 70 percent. WHO adds that 42 percent of all fake medicines reported to them between 2013 and 2017 were seized in Africa.