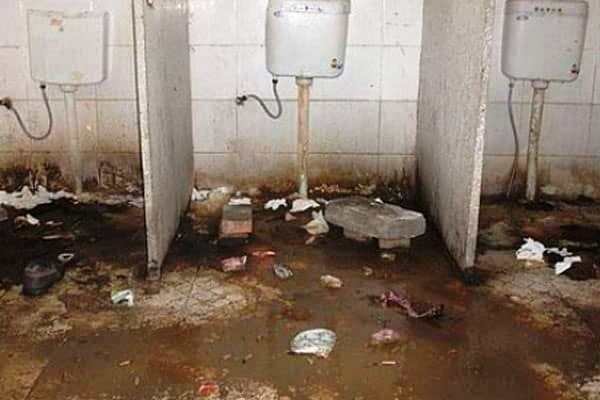 Denizens of Yaoundé have expressed discontent with the state of toilets put at their disposal by bar owners which according to them are homes to many diseases.

Going through some major streets of Yaoundé where beer parlours are located, one realizes that alcohol consumers tend to urinate either by the roadside, bushes or any hidden areas, due to the poor states of toilets.

Just like any other public toilet in Yaoundé, toilets reserved for clients in beer parlours are mostly unkempt, covered with faeces, urine and all sort of papers.  Most customers consequently prefer to answer to nature’s call in nearby bushes, roads and any hidden spaces because they are safer, according to them. “I once tried to use a toilet while drinking in a bar, but my experience in that toilet sent me home directly and I never returned. I lost appetite for my beer that day. You won’t believe that the whole place was covered with excrement and urine, with maggots mingling in-between.

There was no place to even place my leg. I would have vomited my intestines if I had spent another second in that place. As I left the place, I paid for the beer and immediately left for my house where I used the toilet. Each time I think of visiting any bar, that experience discourages me,” lamented Pa Peter, as he prefers to be called.

Just like Pa Peter, Justine Fielefack, a woman in her early 40s says that her experience in a toilet while she once stopped in a bar to share a drink with friends was worse. “I found myself in one of such toilets, where I didn’t really have a choice than to ease myself. Guess what happened thereafter! My organ started itching so harshly just when I left the place. Unable to bear the pains, I decided to visit my doctor who carried out some medical tests and confirmed that my vagina was infected. We however managed to treat it. That was one of the worst experiences I have had in my life,” Justine Fielefack narrated.

Often, most toilets put at the disposal of customers in Yaoundé are flushing toilets, which unfortunately constantly go without water. Other basic toilet necessities like soap, buckets and tissue are never available. Health experts have affirmed that various common bacteria and viruses can be contacted from dirty toilets. Infections like strep throat and staph infections can easily be caught from a dirty toilet seat if someone with the infection has used the toilet before you.

Again, research has shown that microbes from your gut make up 25-54% of faecal matter. Human faeces can carry a wide range of transmissible pathogens, including Campylobacter, Enterococcus, Escherichia coli, Salmonella, Shigella, Staphylococcus, Streptococcus and Yersinia bacteria, as well as viruses such as norovirus, rotavirus and hepatitis A and E among others.

So, there is always going to be an infection risk in encountering faecal matter. People are therefore urged to be mindful of the way they pee and defecate in public toilets, the way the touch public toilets’ door handles and to always wash their hands thoroughly after visiting such places.  The population is also pleading with bar owners to once more look at the state of toilets they put at the disposal of customer, so as to improve on their health situations.