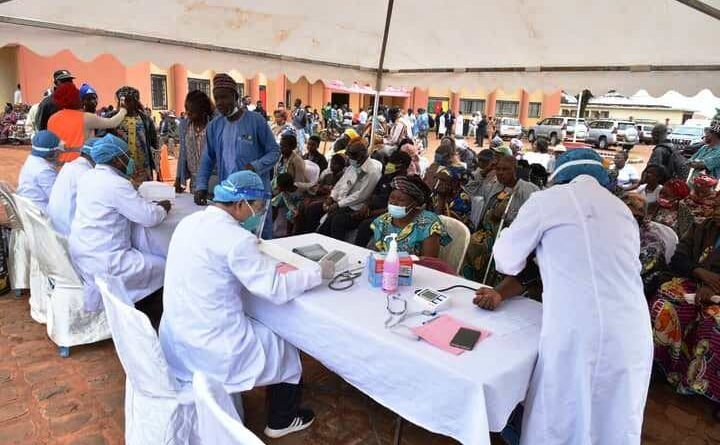 Senate President, Marcel Niat Njifenji recently invited a Chinese medical team to the west région of Cameroon to examine several inhabitants of this locality a few days before the start of the school year.

The Special guests of the President of the Senate went to provide care as part of the 50-year-old Sino-Cameroonian cooperation.

Proud of the success of this campaign, which enabled populations to better understand their general state of health and even to detect certain unsuspected diseases; the mayor of Bangangté, Eric Aimé Niat, declared that:

“On the eve of the start of the school year, the pupils above all need to be in good health before returning to the benches.  Good health is the guarantee of better academic and academic performance.  I thank the Chinese doctors for having made the very numerous trips.  Your action undoubtedly and effectively strengthens relations between our two great nations, ” said Eric Aimé Niat

Dr Tian Yuan hopes that a future campaign will soon be organized to provide more quality care to the sick.

It goes without saying that the rumor of the postponement of the start of the school year has been undermined by these two members of the government, Paluine Nalova Lyonga of secondary education and Laurent Serge Etoundi Ngoa of basic education.  However, public opinion had already rushed to delay the date of the start of the school year while evoking the restrictions imposed by the Coronavirus pandemic.

Another part of the opinion even indicated that this true-false dismissal was linked to the unpreparedness of the ministry of secondary education, this after the appearance on national television on August 23 of the Secretary General of the said ministry, Pierre Fabien Nkot.  The latter had hinted that the specter of a postponement was hovering over the next school year, and the idea spread in public opinion, which hastily concluded with a postponement.